Ovulation tests are really useful when charting your cycle.

The thing is that many fancy (digital) ovulation tests are pretty expensive to use cycle after cycle. I therefore recommend to all my patients to use the simple dipstick LH tests with nothing more than a test line and control line. So let me show you how you can start using them too and not break the bank while you’re charting.

Both Ovulation Predictor Kits (OPK’s) and Luteinising Hormone  strips test the same thing: luteinizing hormone (LH). LH triggers ovulation and so knowing when it spikes helps you identify when you may be ovulating.

Here is why I don’t usually recommend Ovulation Predictor Kits (OPK’s) though:

So if you are starting out and you prefer to get one of these nonetheless, by all means! But if you would like to start with the cheaper simple LH strips, here is how!

When to start testing for LH

If you have just started out with charting, begin testing on cycle day 10. Rember that cycle day (CD) 1 is the first day of menstruation. Once you have charted for a while, you will know when you tend to ovulate and starting 2-3 days before that will be good enough. If you have already been charting your temperature, choose the earliest ovulation day you had in the last 3-6 cycles, and start testing 2 days before that. So if the earliest temperature spike you had was on CD15 for example, then you ovulated CD14, so start testing on CD11 or 12.

Test with mid-morning or early afternoon urine. LH is not all released at once but rises and falls for 1-2 days. It starts to be released early morning and it takes 4-6 hours to show up in your urine. Therefore first morning urine is not very useful like it is with pregnancy tests.

How to use ovulation tests

Here is a picture of what these tests look like. As you can see from my tests & chart, on the morning of  CD14 the line was pretty dark and so I tested again in the evening. That was a good idea because that test was positive (test line and control line are equally dark) while the next day it was negative again because by then I had already ovulated as the next day’s temperature spike shows. 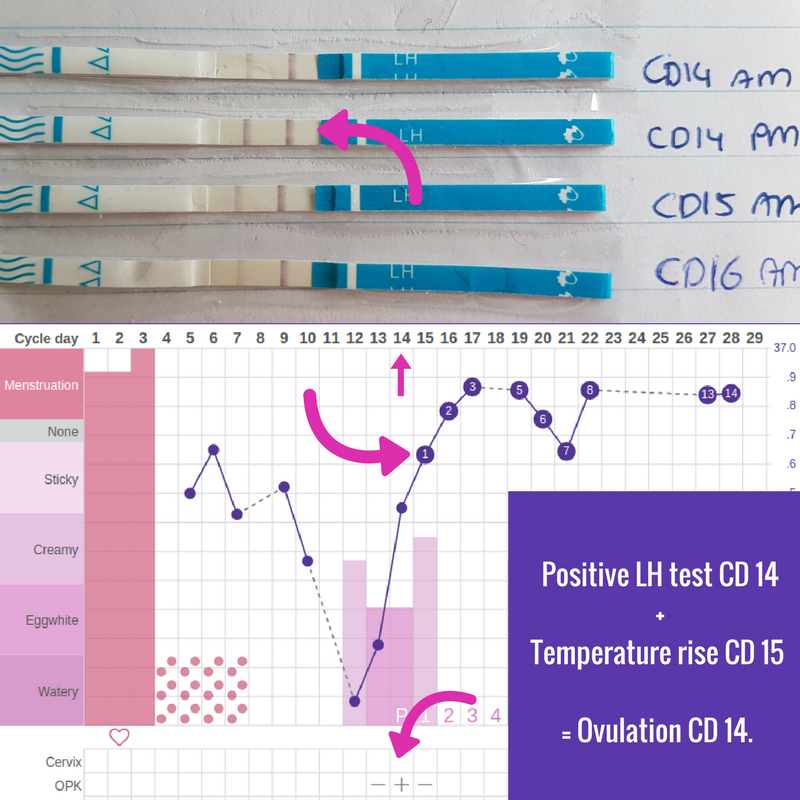 Here is one more. Ignore the purple test strip, that is the MFB progesterone test that I have tested!

Back to the picture below. Here you can see I had a positive LH test on CD13 when the two lines were equally dark. My temperature did not go up till CD 5 though, so I ovulated CD14. 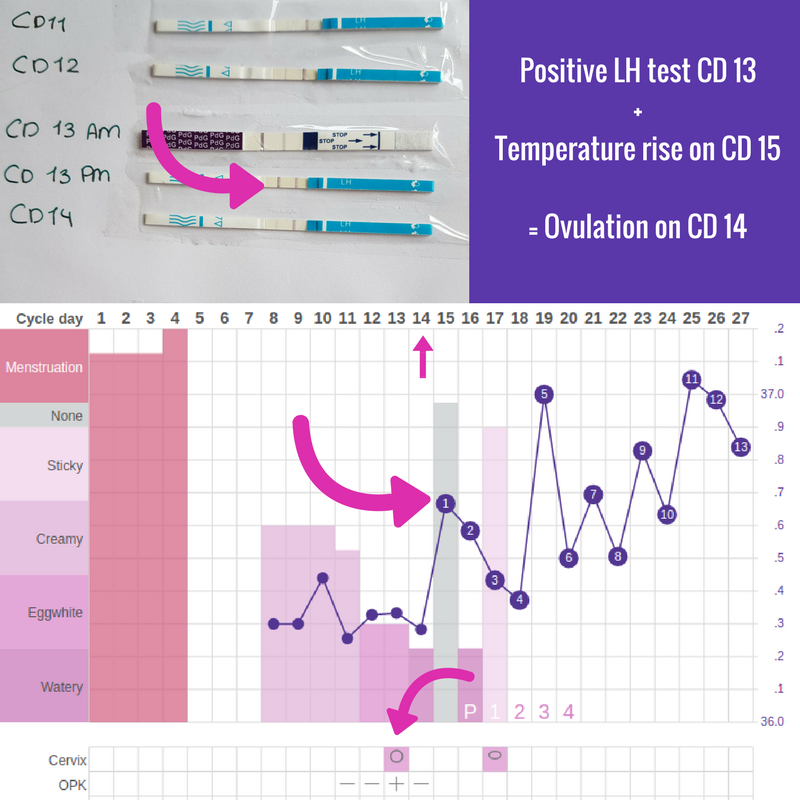 The LH strips tend to all look the same but may have different colors depending on the brand.

I hope you feel equipped to start testing! Want to learn to chart your temperature too? Get a BBT thermometer and sign up for the free course Basics to Fertility Charting.

If you ever notice that you are getting several positive ovulation tests per cycle, then watch this video.